Na h-Eileanan an Iar MP Angus MacNeil joined his SNP colleagues in walking out of the House of Commons yesterday (Wednesday) following repeated attempts by the Tory government to silence Scotland’s voice on Brexit. 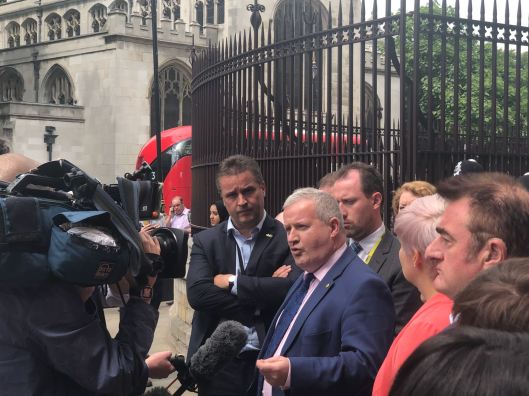 Mr MacNeil joined the SNP’s Westminster Leader Ian Blackford MP in protest, after the Speaker asked him to leave during Prime Minister’s Questions.

Ross, Skye and Lochaber MP Ian Blackford called for the House of Commons to sit in private, following the Prime Minister’s failure to bring forward emergency legislation on Brexit to ensure the Scottish Parliament’s position is considered as the UK leaves the EU.

Mr MacNeil said Scotland’s voice needed to be heard as Brexit will have major implications for vital sectors such fishing and crofting.

He said: “I walked out of the House of Commons because Scotland – and my constituents – have been silenced on Brexit.

“The UK Government’s Brexit legislation ignores the will of the Scottish Parliament and devolution as we know it  – which the people of Na h-Eileanan an Iar, indeed, the whole of Scotland, voted overwhelmingly for.

“Westminster needs to realise they can’t push Scotland about. We’re not in a union of equals and enough is enough.

“Currently we have boats without crews that cannot go to sea due to lack of support from the UK Government in addressing this issue – after Brexit we could have only EU boats in our waters.

“The Westminster Parliament is going to grab powers over agriculture as those powers come back from the EU and this could have serious repercussions for crofting.

“The UK government’s shambolic Brexit is putting jobs and livelihoods at risk and the SNP is the only party who will stand up for Scotland.”