Despite the UK government’s opposition, the Bill passed its Second Reading in Parliament with the backing of SNP, Conservative, Labour, Lib Dem, Plaid Cymru, Green and DUP MPs. The Bill will now proceed to Committee Stage for further scrutiny and amendments.

The Refugees (Family Reunion) Bill looks to ensure that:
·         Child refugees in the UK would have the right to sponsor their close family to come to the UK, so they can rebuild their lives together and help them integrate in their new community.
·         An expansion of who qualifies as a family, so that young people who have turned 18, and elderly parents, can live in safety with their families in the UK.
·         The reintroduction of legal aid, so refugees who have lost everything have the support they need to navigate the complicated process of being reunited with their families.

The SNP MP’s Private Members’ Bill has been backed by the Refugee Council, the UN Refugee Agency, Amnesty UK, the British Red Cross and Oxfam GB. 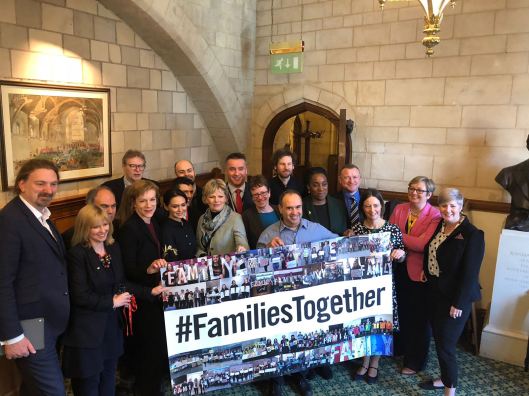 “I’m delighted that this Bill which seeks to reunite refugee families has passed its first major hurdle in Westminster, and is one step closer to ensuring that refugee families are no longer cut off from each other due to the UK government’s inhumane and strict immigration rules.

“The Refugee Family Reunion Bill is not a party political issue, but a humanitarian one. It is a Bill that puts compassion first and seeks to bring to an end the callous approach of the UK government which has kept refugee children away from their parents, siblings and wider family.

“This Bill would not have reached the stage that it has without the help and support of MPs from across Westminster and organisations like Amnesty International UK, UNHCR, Oxfam and many others.

“More than half of the world’s refugees are children; young people who – having fled hell on earth – are searching for ways to rebuild their lives. The UK government has a responsibility to hold out that helping hand, rather than turning its back on them.

“Today, we have overcome the first hurdle. I now look forward to continuing to work with MPs and organisations to ensure that refugee families are no longer kept apart, and that this Bill becomes law.”