Angus Brendan MacNeil MP, SNP Fisheries spokesperson at Westminster is writing to the Secretary of State for DEFRA Michael Gove MP to ask that he clarifies what implications Brexit will have on the Scottish fishing industry.

Mr Macneil is urging Westminster to resist a power grab of Scottish fisheries and enable the Scottish government to negotiate on behalf of Scottish fishermen and thus prevent them being betrayed by the UK Government as happened when the UK joined the European Union. 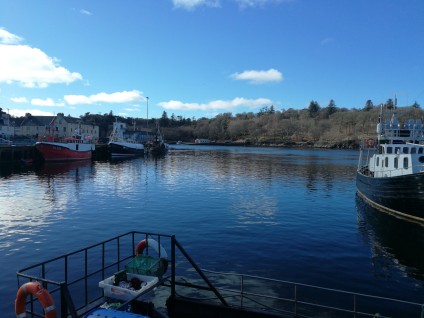 “According to UK Government figures, a World Trade Organisation deal will result in damage to GDP of 8 percent, or more than four times the damage caused by the economic crash.  Clearly, based on these figures Brexit is an all-round unmitigated disaster.

“The only mitigating area that I can see is in fisheries, but the UK government is in danger of giving that away.  Therefore, I am urging the UK government to get fisheries off the Brexit table and not to use this vital Scottish industry as a bargaining chip.  Power over fishing needs to be given to the Scottish Government to prevent Scottish interests in this industry being negotiated away.

“The UK government have had very little to say on fisheries.  They have acknowledged that they have been dodging questions I have asked them in the House of Commons, about who will get the increased tonnage they say they will take from the European Union and when the benefits of this will be seen.”

Included below the exchange between Angus MacNeil MP and Therese Coffey MP during Environment, Food and Rural Affairs Debate in House of Commons on 8th March 2018.

At the last EFRA questions on 25 January, I said to the Secretary of State:

“The question for fishing, given all the tonnes he will take from the European Union, is this: where is it going, and when?”

The Secretary of State answered:

“On to the plates of people from the Western Isles to the south-west of England, who can enjoy the fantastic produce that our fishermen catch every day.”

I said, “Good dodge”, and he replied, “Thank you.” Today, I wonder whether we can get an answer to the question with no dodge. Given all the tonnes the UK Government tell fishermen they will take from the European Union, where is it going, and when?

Therese Coffey – The Parliamentary Under-Secretary of State for Environment, Food and Rural Affairs

The Government are, of course, still seeking a trade deal, but the hon. Gentleman should also be aware of the fact that countries such as Norway and Iceland, which are independent states, have control of their waters and grant access to them. There are annual negotiations for shared stocks, and we will continue to be part of those negotiations.