Isles MP Angus Brendan MacNeil is calling on Ross McEwan, CEO of the Royal Bank of Scotland (RBS) to come out of hiding and face customers in Barra.

RBS has responded to Mr MacNeil’s letter stating that they would not be re-visiting their decision to close the Castlebay branch in June 2018.

Today, Mr MacNeil spoke at a Westminster Hall debate on the role of banks and their responsibility to the communities they serve. 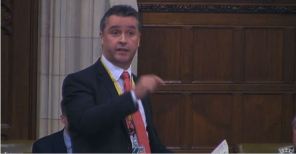 “Instead of coming to Barra to meet customers, Ross McEwan CEO of RBS sent a representative who dodged in and out of the island on Friday 5 January.

“RBS say that they have considered the matter carefully but that they will not be re-visiting their decision yet they have not consulted with their customers nor carried out an economic impact assessment of their decision to close the Castlebay branch.

“The RBS should drop Scotland from their name, such is the contempt they are showing our country.

“An eye-watering £16million was paid in bonuses to RBS Senior Executives, this would pay the wages of the staff at the Castlebay branch for about 266 years that is the level of greed we are seeing here and not just greed but cowardice and irresponsibility.

“Ross McEwan and the RBS need to have the courage of their convictions and meet with islanders.

“At the debate, I asked John Glen MP Economic Secretary to the Treasury if consent was sought. Who is in charge?  Is the bank owned by the Government or do the bankers own the Government?  The UK Government cannot play Pontius Pilate with this issue.”