Na h-Eileanan an Iar MP Angus Brendan MacNeil is calling for clarity from Scottish Water on the future of a major water mains upgrade project on the Isle of Harris.

Concerns have been raised with Mr MacNeil by representatives of the North Harris community that the plan for a new water mains pipe line between Tarbert and Hushinish has been halted suddenly.

Mr MacNeil said: “This vital project will not only resolve some of the issues with water supply between Tarbert and Hushinish which have been ongoing for many years, but will also allow other developments such as housing to go ahead where this has not previously been possible.

“Scottish Water were expected to begin work this week but out of the blue they have cancelled public engagement meetings and announced a review due to an increase in the cost of the work.

“I am in correspondence with Scottish Water to try and understand their point of view and am seeking detail on why the expected cost of the project has gone up so significantly and why it will take them six months to review this project.

“The community need reassurance that Scottish Water are still committed to this vital project.”

Calum Mackay, Chair of North Harris Trust said: “The water supply between Tarbert and Hushinish has been problematic for many years. Scottish Water have undertaken a number of initiatives which have provided partial solutions however many issues still remain.

“When Scottish Water announced a number of years ago that they proposed to lay a water main pipe line between Tarbert and Hushinish the community was delighted as this would provide a long time permanent solution and open development opportunities.

“The proposal was to lay a new pipe which would ensure that everyone between Tarbert and Hushinish would get the same level and quality of supply.

“One of the problems with the current water supply on that road is that there is no capacity for further developments to take place, eg house building, small business development, etc. 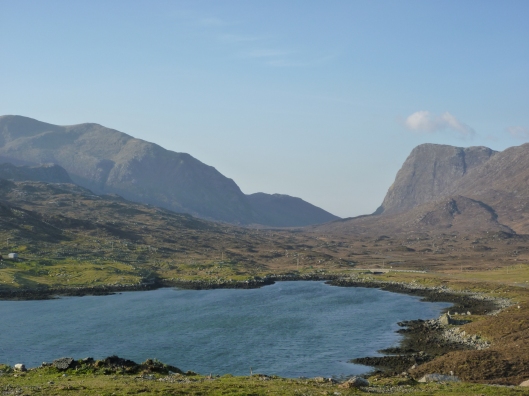 Meavaig, the site where part of the water main is due to be laid.

“The news last week that the proposed works had been halted at the last minute came as a total shock to the local community. This is apparently due to “a significant increase in the expected cost of the work”. It is incomprehensible how this increase in cost could be discovered at this late stage.

“Scottish Water maintain that “there will be no change or disruption to the existing services we provide for customers in the area and we will continue to ensure customers receive a reliable, good quality, drinking water supply”. Unfortunately many residents in that area do not receive any service from Scottish Water and have to rely on private supply.”