Tarbert (Isle of Harris) is the latest community in a rural mobile not-spot location to receive 3G coverage with Vodafone’s Rural Open Sure Signal programme.

The village has until now suffered from unreliable mobile coverage and slow network speeds.  The Vodafone Rural Open Sure Signal (ROSS) programme uses Vodafone’s innovative Sure Signal technology, to bring high quality 3G voice services and much needed access to the internet via mobile devices to communities in some of the UK’s most remote areas. 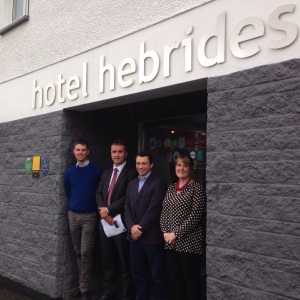 The Tarbert community application to the ROSS programme was supported by Na h-Eileanan an Iar MP Angus MacNeil who is also supporting applications from other areas of the Isles.

Mr MacNeil MP commented: “I was delighted to support the community application for 3G coverage in Tarbert and am looking forward to seeing other communities in the islands also benefit from this.

“Mobile phone connectivity is important and it is something that we have been working on continuously for years. This is an interesting technology that brings signal from the Internet and provides hotspots.

“Hopefully we will see more of these in the islands in the main centres and ferry ports both for locals and visitors. This also allows Vodafone to give a better coverage of service to any of its customers in or visiting the islands.”

Angus MacLeod, Hotel Hebrides, who is the Village champion for Tarbert commented: “Vodafone providing a 5 bar 3G signal in Tarbert is bringing the local population up to speed with what you expect in 21st century Scotland. It also makes the village more attractive to visitors who are the life blood of the local economy. In our own hotel trade, connectivity is becoming as important as hot water – and so we welcome Vodafone working together with our local MP to bring this technology to our rural community.”

Jorge Fernandes, Vodafone UK Chief Technology Officer, said: “I am delighted that Tarbert has joined our Rural Open Sure Signal programme. Mobile connectivity is an essential service for communities and businesses to thrive in today’s digital world and support local economies. As part of the Rural Open Sure Signal programme, we are committed to investing in our network to provide access even in remote locations where it is otherwise almost impossible to reach. I am excited to see the transformation for Tarbert and other communities which have been successful for this pioneering programme.”

Na h-Eileanan an Iar MSP Alasdair Allan said: “I have met with Vodafone a number of times about the reception in various parts of the islands, as well as the time regularly being taken to repair Vodafone masts when something goes wrong. I welcome the news that Vodafone intend to expand their coverage in parts of Uist and Harris and look forward to hearing from constituents about whether this is being sustained.”

The ROSS programme is a national initiative by Vodafone UK to provide reliable mobile access to up to 100 rural communities in mobile not-spot locations. Launched in July 2014, with support from local MPs, councils and rural action groups, the programme received an overwhelming response, with applications from communities across the country from the Shetland Islands to Cornwall and from the mountains of Snowdonia to the Norfolk coast.

Mobile connectivity plays a vital role in keeping communities in touch and helps support local economies. However, rural and remote locations often miss out on advantages provided by modern communication tools, due to the complexity of delivering network coverage. This can be because of the geography of the area or difficulties with planning permissions in places of outstanding natural beauty. The ROSS programme uses innovative ‘femtocell’ technology to provide an alternative solution to bring 3G mobile access in locations where it isn’t possible for networks to provide coverage through traditional means.

As part of the ROSS programme, Vodafone teams have now surveyed each of the 100 communities which were added to the programme at the end of last year.  The surveys included physical ground assessments by Vodafone engineers as well as detailed fixed broadband speed checks. The teams have also drawn up plans for viable communities to illustrate where the equipment will be sited. The process saw some of the initial communities having their implementation postponed until their community broadband speeds and availability have improved.

As well as using Rural Open Sure Signal to plug rural “not-spots”, Vodafone is spending around £2 billion on its network and services across the country over 2014 and 2015.  This includes the provision of HD (High Definition) Voice technology on its 3G network and the extension of its 4G coverage to 650 cities and towns and thousands of smaller communities across the UK.