The Scottish Free School Meals campaign are “delighted” by the Scottish Government’s announcement, saying it “marks a major step forward”.

“This significant announcement underlines  the SNP Government’s commitment to investing in Scotland’s future.

“This move will also act as a much-needed financial boost for families during this tough economic climate, saving families at least £330 per child. This is vital support at a time of Westminster cuts that are hitting the poorest hardest.

“While the UK Chancellor George Osborne warns of another £25billion cuts that will continue to hit the most vulnerable in society, the SNP is investing in our future and helping protect those facing poverty.

“The difference in priorities between the two governments north and south of the border could not be starker.

“These announcements will have the greatest possible effect, given the limited resources available to us.

“But so much more can be done with the full powers of independence. A Yes vote would ensure Scotland gets the full financial freedom of independence – a Scottish parliament and government with real economic powers, as illustrated in the below diagram, so that we can make the right decisions for Scotland.” 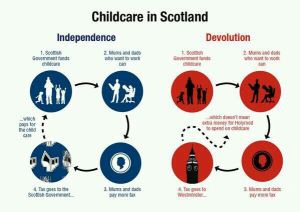